Sustainable Donations Clean Up More Than Just IT Waste

Request: to spread the word about a great cause Waste can be dangerous

In the aftermath of the Vietnam War, thousands of unexploded bombs remain as litter in the countryside of Laos to this day. An echo of a war that still affects people nearly 60 years later. Legacies of War is an organization devoted to speaking out for the citizens affected by the war waste to the UN, Capitol Hill, and to whomever will listen.

Aging weapons are extremely deadly; these unexploded bombs detonate at the slightest bump like by a stray soccer ball, shifting soil after rain, or even when nicked by a shovel. Innocent citizens of Laos, generations after the war, are still under attack by these phantoms, and the US has a responsibility to clean up after itself. As you might imagine, this kind of message needs a lot of support.

IT Assets change the game

Technology can provide a megaphone to the meek, and in the case of Legacies, a new printer and some other devices were all that was needed to amplify their message. Being able to add color to the already vivid imagery of what these unexploded bombs are capable of is vital to raising awareness. But even the simple upgrade of printing color presentations was too costly for the organization.

As a non-profit, Legacies cannot often afford the devices that would help their important cause. But, thankfully, there are corporations who agree that Legacies’ cause is worth donating to. Both Chick-fil-a and Charles Schwab, at different times, have benefitted this great organization with what would have been an overwhelming cost otherwise—not just for Legacies, but also for the corporations with regards to potential e-waste.

Saving a waste stream from unsustainability

Unsustainable dumping happens with more than just war-era explosives. With upgrades and security challenges creating a wellspring of e-waste for businesses, tens of thousands of pounds of e-waste is sent to landfill every year, with the majority of that e-waste coming from larger corporations (you can read up on the dangers of e-waste, here).

However, Charles Schwab and Chick-fil-a agree that there are better uses for surplus IT Assets. Thanks to their understanding of the intrinsic value of technology, Legacies of War was able to receive a copier, a projector, and 5 iPads in 2020 to add to the 2 laptops they received in 2018. With these simple devices—seemingly insignificant donations to mega companies—Legacies can now increase the scope of their cause, gain enthusiasm from supporters more readily, and better manage their small team of volunteers scattered around the world.

It’s a good thing when preventing e-waste can help clean up another kind of waste. being able to leverage technology toward their cause is another example of how sustainability and IT Assets are GoodTogether. 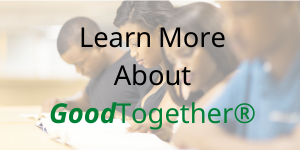